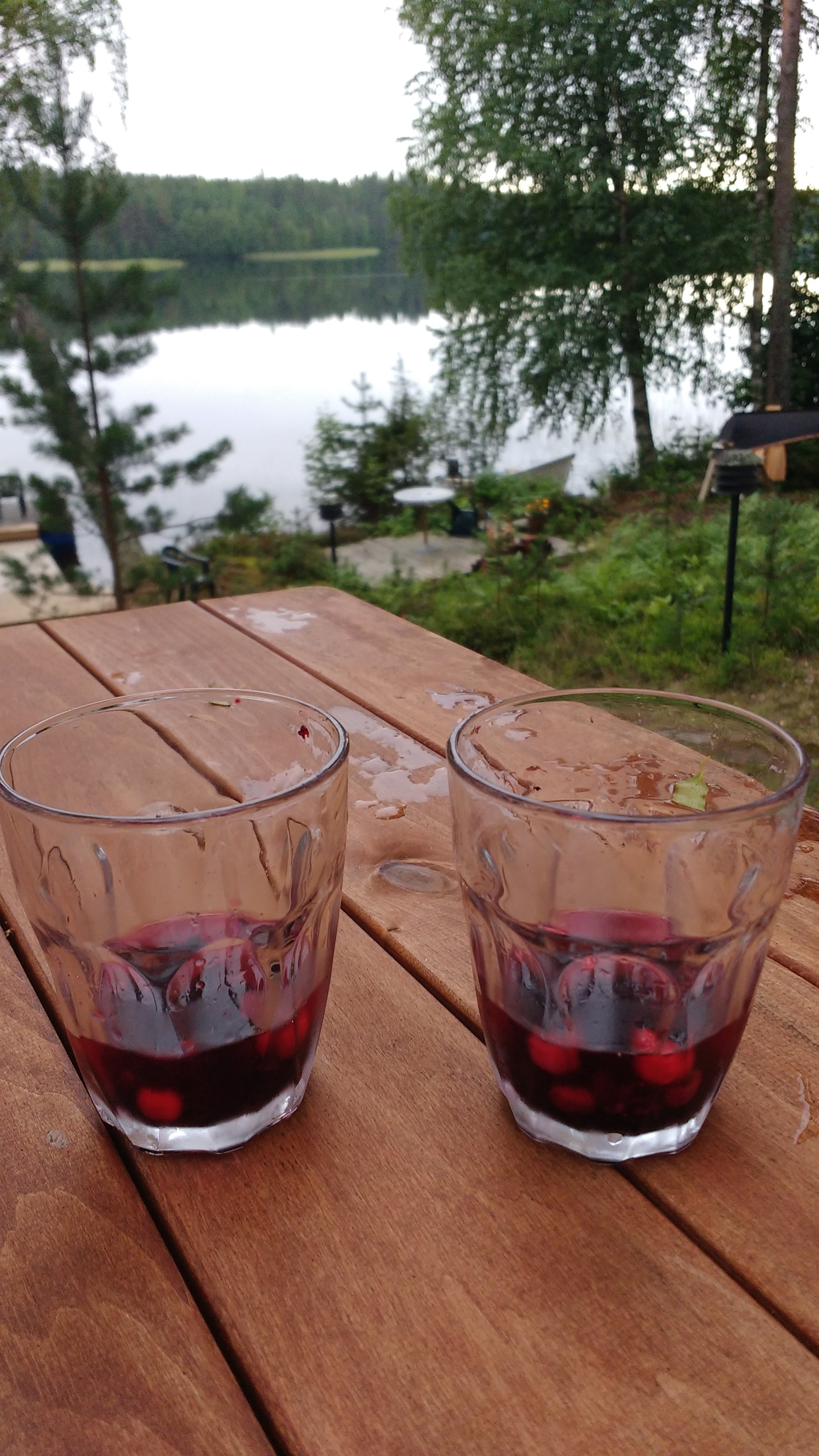 I’m using my vacation measurements for this one.  Combine everything in a rocks glass (or equivalent), and give a quick stir.  Garnish with fresh lingonberries and blueberries.

* If you don’t homemade compote on hand, muddled fresh berries or a spoonful of your favorite jam and some simple syrup should suffice.

Hey there!  Mrs. Muddle and I are back from our trip to Finland and Estonia, and we are pleased to report that both those countries have pretty formidable cocktail (and beer) scenes.  If there is one takeaway from drinking in that part of the world, it’s that fresh local ingredients in various forms are all the rage.  And I’m not just talking juices ; there were purees, foams, syrups, and of course garnishes.  Also berries.  Man do they love their berries.

We started out in Heslinki, arriving at our hotel around 4pm local time.  Given the 8 hour flight, we figured it would be a low key night.  Of course, it didn’t turn out that way.  Probably had something to do with it staying light out well past 1030pm.  Anyway, at the end of the night, we found our way to Trilby and Chadwick.  This place was heavy on the speakeasy vibe.  No sign out front, blacked out windows. Entry required ringing an old style telephone and someone slid open one of those little door windows to see how many are in your party.  Then they escorted us inside, which was decorated sort of like an old Victorian parlor.  Lots of books and leather chairs with brass rivets.  The menu was more like a collection of short stories, each one accompanied by a drink.

If you go all in on the speakeasy thing, you better make sure your drinks are on point. Luckily Trilby did not disappoint.  We ended up staying for three drinks each, and they were all as delicious as they were unique.  In fact, one of the most interesting cocktails of my entire trip was the first thing I ordered here.  It was an ocean themed cocktail. From what I can remember, it had gin, salt, vermouth, some citrus, and a seaweed garnish on the rocks.  And by rocks I mean a handful of chilled seashells.  I can honestly say, I’ve never seen that before.  Despite their no picture policy, I managed to clandestinely sneak a shot, cuz how am I not capturing a rocks glass full of booze and shells?

The next night at dinner I ordered a house G&T using Napue, a Finnish rye based gin (and one of my duty free purchases).  It was garnished with lingonberries and a spruce sprig, and was one of the freshest tasting gin and tonic’s I’ve ever had.  That was the theme that tied much of the imbibing exprience of the trip together — bright freshness with local produce.

Four hours north in Kuopio, we again went in search of cocktails, having reached our beer intake limit during dinner.  We stopped in one bar that had a decent cocktail list.  I actually ended up having some Finnish Whiskey from Teerenpeli Distillery (two thumbs up), and we began chatting with the bartender.  As we discussed our love of all things shaken and stirred, he said we must go to Intro down the street.  When one bartender tells you to go to another bar, you listen.  There we were greeted by drinks with fresh strawberries and strawberry liqueur, raspberry shrubs, and even house made carrot syrup!  Again, that last one was a totally new experience, but a tasty one nonetheless.  Named the Sjoba Collins, it also had egg white, grapefruit vodka and lemon.  Savory and refreshing all at the same time.  The base of the strawberry drink was Xante, a Greek pear cognac I never heard of before but will seeking out very soon.  Its greek origin led to the amazing drink name Opa-Wan Kenobi.

Our last stop was Tallinn, Estonia.  I would say the craft beer scene was better here than Finland, but they were no slouches in the cocktail department either.  We even found a spot, Manna la Roosa, that we went back to for a second time the next night.  This place was decorated like a cross between a Russian Tsar’s sitting room, a TGI Fridays and a coffee bar in Williamsburg.  That is do say, lots of old world detail with a bunch of vintage, funky, colorful shit on the walls and floors.

Freshness continued it’s reign here, as did local ingredients.  The Mingi Dill even had nettle syrup, along with vodka, cucumber and dill.  A savory element colliding with refreshment again. The Razz Al Cool took the classic pairing of kiwi and strawberry, and combined it with gin, ginger, lime, simple syrup and Sprite! The result was a highly sippable long drink that even had a touch of class.  A few drinks featured dehydrated citrus wheels for garnishes (pictured below right), which we had seen in Finland as well.  Very cool technique, and I guess gives you something to do with a food dehydrator besides making jerky. 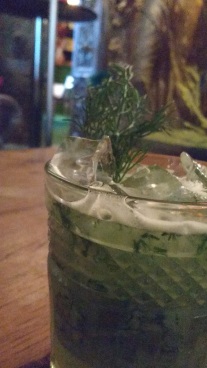 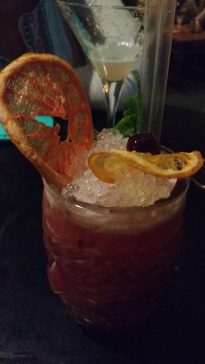 Some other treats included three different homemade schnapps (chokeberry, cowberry, and rhubarb) from Leib.  They also had their own house aquavit, which was appropriately heavy on the caraway.  At another restaurant I spotted a birch liqueur on the chalkboard.  Being an avid fan of birch beer, I had to order it, and was glad I did.  It was like a boozier, thicker bodied version of one of my favorite soft drinks. 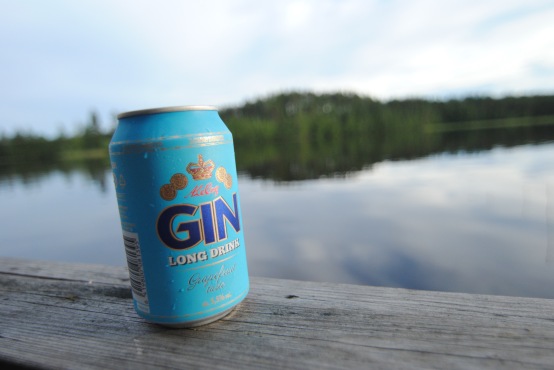 Lastly, we’ll go back to Finland, for two reasons.  One, I’d be remiss if I didn’t mention one of the best things I’ve had out of a can in a while.  It’s called Long Drink, and it’s basically gin and grapefruit soda mixed and ready to go.  It doesn’t get much better than sitting near the lake after a stint in the sauna sipping on one of these.  As an added bonus, they come in tallboys too.

The other reason is to talk about the Everyman’s Rights.  We spent the last three days in Finalnd in a mökki in the lakeland region.  It’s basically a little lakeside cabin tucked away in a forest of birch and spruce.  All around it grew wild lingonberries and blueberries.  No wonder berries are such a big deal here.  We foraged for some one day (taking advantage of the the legal concept this drink is named after) and made a quick compote.  It made a wonderful breakfast spread on some dark and hearty bread, but I had other plans for it because: vacation.  We bought a bottle of Saimaa Vodka from the Alko (gov’t run liquor store, only place to buy hard liquor in Finland) for our stay, and I was determined to make some cocktails with it.  This compote was just the thing.  Along with a bit of lemon juice and the cold vodka from the fridge (we had no ice), it was the perfect drink to take in the glassy waters of the lake and fully engage in mökki life.  Kippis!!

** Honorable mention goes to the DM Bar in Tallinn.  The drinks were decent, but what really set this bar apart is that it was a Depeche Mode theme bar.  Depeche Mode memorabilia plastered the walls.  Only music playing was Depeche Mode.  All the drinks were named after Depeche Mode songs.  The cherry on top of the I’ve-never-seen-that-before sundae.