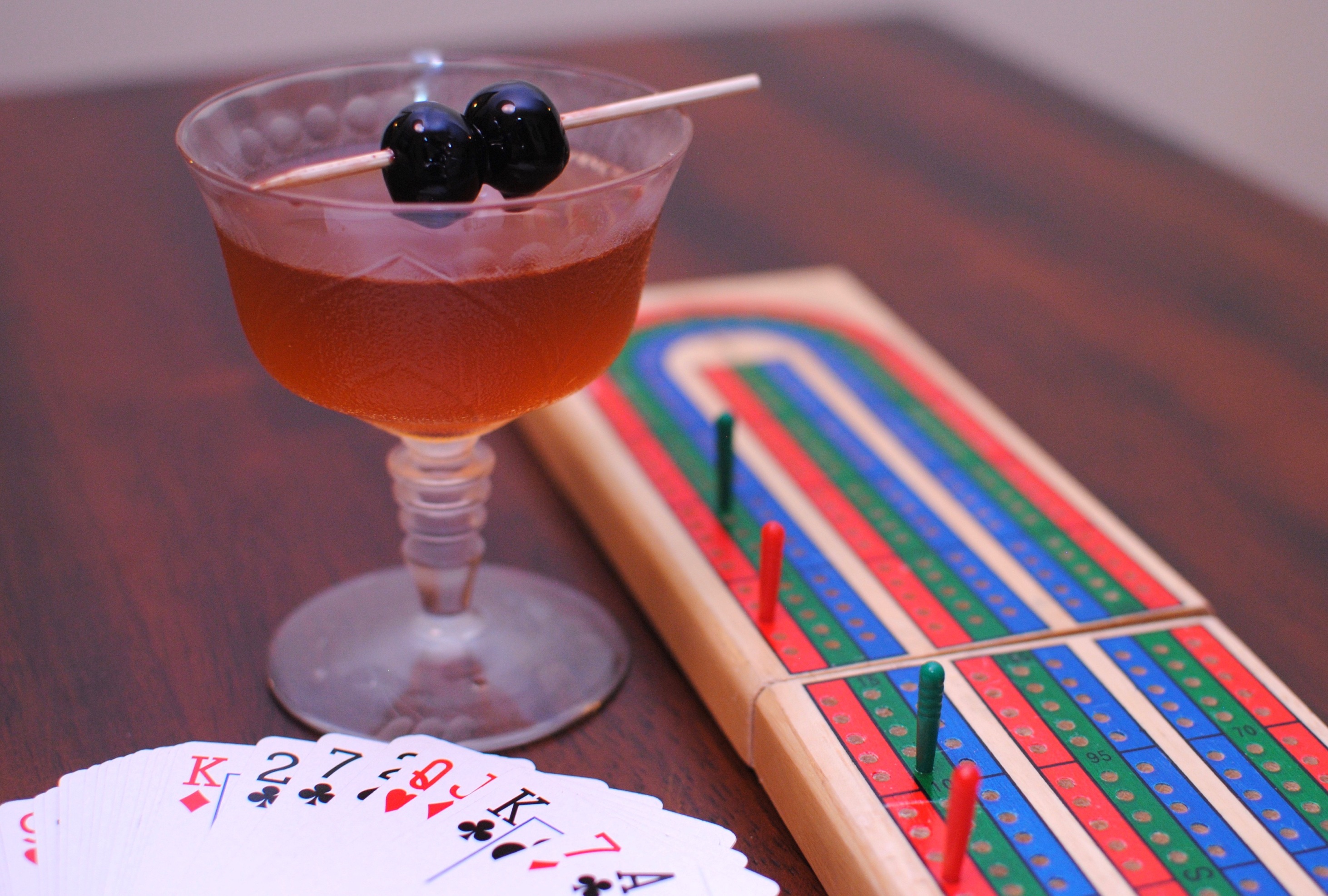 Two for His Heels

Stir with ice, strain into a chilled cocktail glass.  Garnish with a cherry (or two).

Friday nights are usually cocktail nights in the Muddle household (and Saturday too, if I’m being completely honest…and sometimes Thurdsays…).  While we sip our drinks, board games and card games often make their way to the table.  A few drinks and some friendly competition make for quite an enjoyable evening.

Over the years we’ve taught ourselves a variety of new games.  Some stick more than others, and Cribbage is definitely part of the regular rotation.  It’s an old English card game that uses a wooden board and pegs to keep score.  Chances are if you go down to your local pub, there might be one sitting behind the bar.  Being of British origin, it even has its own unique set of terms to call out certain combinations during gameplay.

These include phrases like “three for the run”, “one for the last” and “muggins”.  All pretty solid cocktail names in their own right.  In fact, I may consider doing a series of cribbage themed drinks sometime in the future.  For now all I’ve got is the Two for His Heels, which is named for when the dealer turns over a Jack to start the hand.

When I came up with this drink, I drew on my love of Perfect Manhattans and wanted to make something with both sweet and dry vermouth.  I decided to use Genever as a base, sort of as a nod to the whiskey in the aforementioned classic.  Sherry is very much making a resurgence, so I decided to see what I could do with it here.  Judging by the drinks in the surrounding pages of my journal, I must have recently acquired a bottle when I first came up with this one, because it shows up a few other times in the neighborhood.  A barspoon of orgeat and a dash of orange bitters rounded out this equal parts template.

Two for His Heels hits you with a trifecta of grape notes from the two vermouths and Sherry.  Genever lends a subtle sweetness from beginning to end.  The orgeat coaxes out the nuttier flavors from the sherry, and adds a little extra body to the drink.  Bitters bring a touch of complexity to the drink, as well as a faint citrusy aroma on the nose.