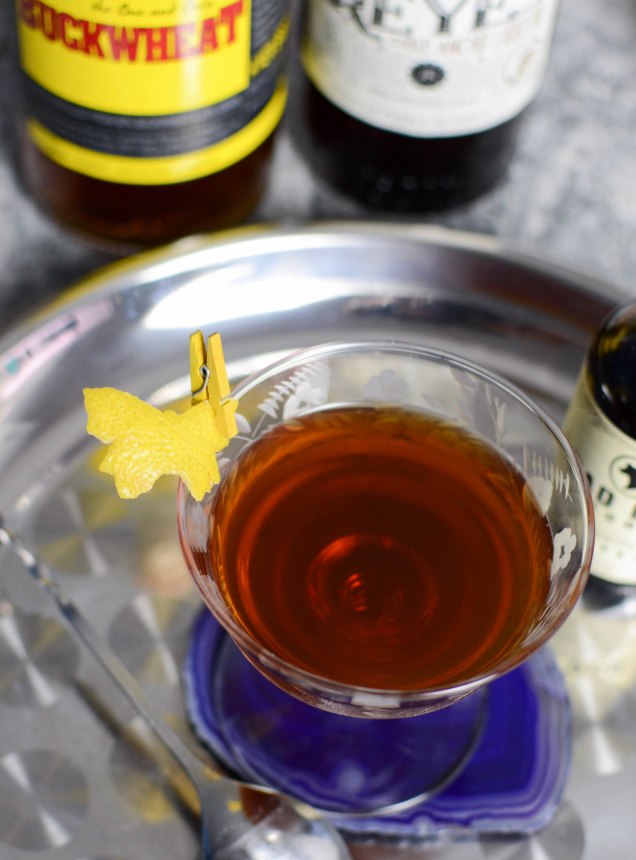 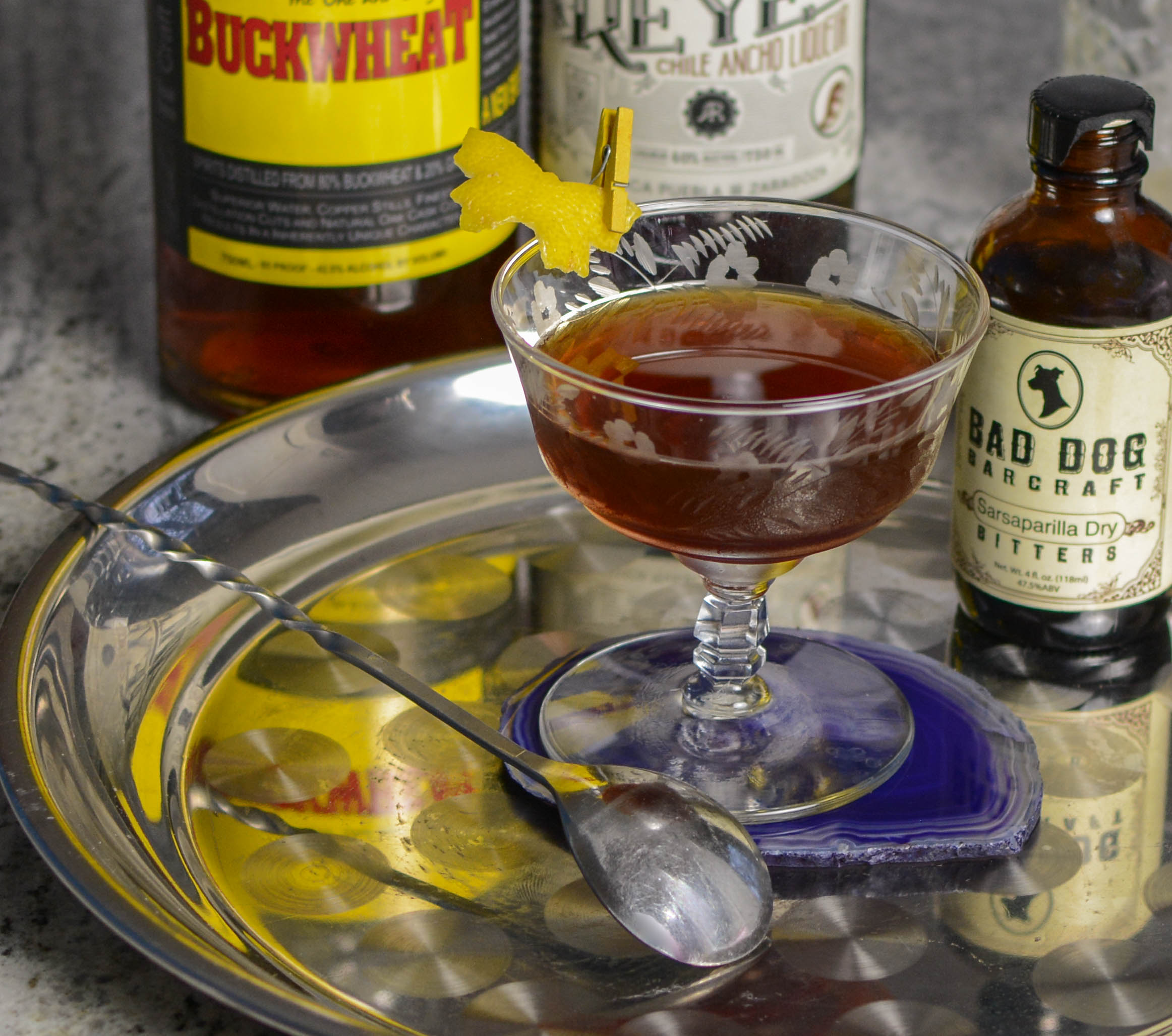 Stir with ice, strain in to a chilled cocktail glass. Garnish with lemon butterfly (or a twist will do too)

Guess what?  I love whiskey.  Mostly of the American persuasion – your bourbons, ryes, and whatnot.  I’m always on the lookout for new distilleries or interesting mash bills.  So when I saw the bright yellow label of The One and Only Buckwheat Whiskey from Catskill Distilling Company beckoning, I had to answer its call.

First, let’s go back to whiskey.  My first love, bourbon, has a mash bill of at least 51% corn, rounded out by some combination of rye, wheat, and malted barley (or other grains).  Likewise, rye whiskey has at least 51% rye, with other grains rounding out the bill.  The One and Only is made from a staggering 80%(!) buckwheat, and 20% small grains.  As a result, it’s not really a true whiskey (which is a grain distilled spirit) since buckwheat is technically not a grain. It’s actually a plant with grain like seeds.  But that’s just semantics, cuz this thing looks, tastes, smells, and feels like a whiskey, albeit a very unique one.

Remember that burnt sienna crayon in the crayola box?  That’s what this stuff looks like.  The nose is very earthy, with aromas of leather, char, tobacco, and a hint of sweetness.  Like if you walked into a 19th century parlor where various railroad tycoons discussed business concerns.  In terms of taste, all those flavors carry over, with a bit more smoke and toffee notes.  The mouthfeel is chewy and almost chalky, in a good way.  Truly unlike any other whiskey I’ve had.  At 85 proof, there’s a nice burn on the swallow, with more roastiness coming through.  It’s a great change-up from my normal sipping whiskies, and puts classics like Manhattans and Old Fashioneds in a whole new light.

I didn’t really have much of a plan when I set out to make this week’s drink, outside of knowing the One and Only would be the base spirit.  I knew the other ingredients had to be large personalities as well.  Ramazzotti added some cola and root beer notes, plus bitterness to keep things honest.  I really like using my dry sarsaparilla bitters with that Amaro since the root beer and birch beer flavors come out even more.  Some Ancho Reyes provided a bit of heat, and dry vermouth held all the sweetness in check.

On the nose, musty whiskey notes are complimented by a root beer float aroma.  The chalkiness comes through on the sip, but still plenty of toffee and caramel notes as well. They bring out the sweetness in the sarsaparilla and Ramazzotti. Lots of low notes after every sip, with the ancho spice and bitter amaro providing the counterpoints.  The finish is more wood and whiskey, followed by a dry spice that perks up the tongue and keeps you coming back for more.

This Buckwheat whiskey is really cool stuff.  If you’re a fan of any type of American whiskey, you should grab a bottle.  I bet even Scotch lovers will enjoy it too.  There really isn’t much else like it on the market (hence the name, I guess), and it’s equally good as a sipper on its own or a component in your favorite whiskey cocktail.  As for the name – well, I’ll just let Eddie explain.

One thought on “Hi, I’m Buckwheat”