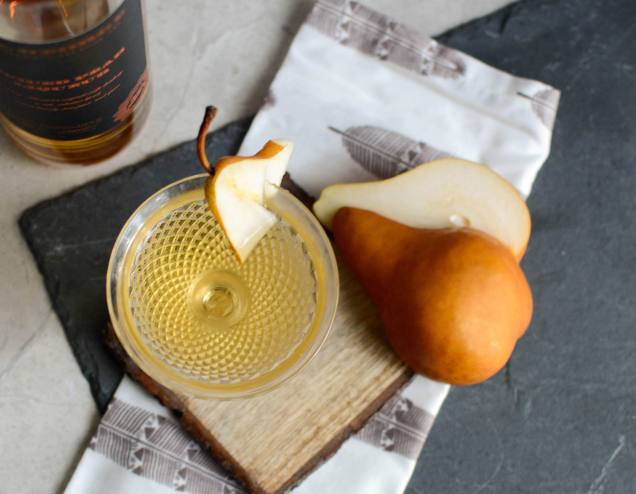 Stir with ice, strain into a cockail glass.  Garnish with pear slice.

Guess what? It’s time for our 5th (!) installment in the bottle swap series. As a brief refresher, the Bottle Swap ™ is that thing Garnish Girl and I do where we each buy a bottle of something, and then trade half of that bottle with the other person. So, for the price of one bottle, we each end up with two things on our wish lists. It’s a win win. Previous installments included ginger liqueur, Ancho Reyes, Suze (hers; mine), and banana liqueur. Now it’s time to get down with St. George Spiced Pear! Be sure to check out Katie’s Spiced Pear Punch before you read any further!
I’ve stared this bottle down on the shelves during many a trip to the liquor store. Probably cuz I’m always seeing other people’s tasty posts on the ‘grams. For what ever reason though, I never actually pulled the trigger. Lucky for me, it’s bottle swap to the rescue.
For these swaps, I like to try to get bottles with flavors that aren’t well represented in my bar. I have a fair amount of your standardish fruit liqueurs (like orange and cherry), as well as some more esoteric bottles (eg Slivovitz plum brandy and arctic cloudberry), but nary a bottle of pear anything up until now. Which is a shame really, cuz I love pears.

This particular bottle is from St. George Spirits (you might want to check out their gin, or Bruto Americano, coffee liqueur, or anything really), and is actually an amped up version of the Pear Brandy, made with almost 30 lbs of Bartlett pears per bottle. They add some warm baking spices to the base to change the profile a bit.  Those spices make this spirit perfect for crisp fall days are even to for joining in on all the holiday flavors flying around right now. Don’t be fooled by it’s festive nature though, this is still a pear forward sip.

Using Mezcal as a base felt like an intriguing proposition. The smokiness would blend well with the spices, and I had a hunch about the pear and agave combo. I wanted to keep things pretty simple, so the only other bottle to join the party is Licor 43. Let’s be honest, vanilla and pear are totally a power couple. 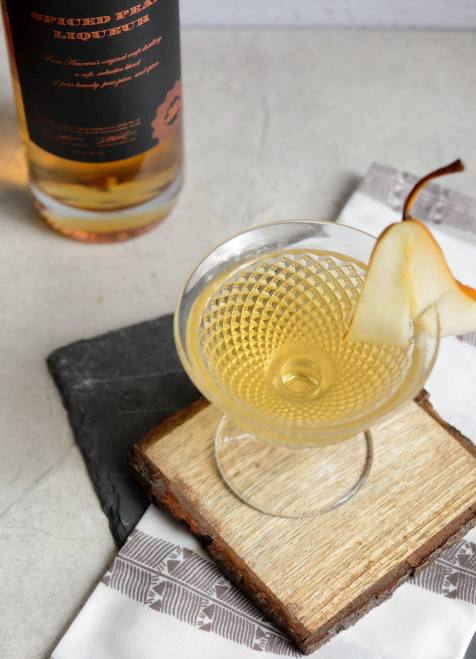 The Decider Ring started off with lots of smoke and pear on the nose, rounded out by hints of cinnamon and clove. Pear comes through on the sip, highlighted nicely by the vanilla in the Licor 43. Agave brings in some earthiness as it rides with the spices, and vanilla keeps it all smooth. The finish is more pear, which is rather impressive considering it’s sharing a glass with that loud mouth Mezcal.  As for the name – well, that’s just another on I pulled off my long list of potential names.  Always works in a pinch.

Don’t forget to head over to Garnish Girl’s blog to see what she did with her half of the bottle.  Even better, find a friend to do a bottle swap of your own!  And stay tuned to see what else we traded in the next installment.